to search all of Writing.Com.

>
Browse By Type
About Our Item Types

Members: 1,272
Guests: 132
Total Online: 1,404
SPONSORED LINKS
Creative Apps
Mobile apps to spark your creativity! Prompts and more...
Writing.Com Zazzle Store
Cool products created by Writing.Com!
Advertise Your Link Here!
You can advertise on Writing.Com for pennies per click.
BY ONLINE AUTHORS
Challenging Poetry
a descent into poetry insanity
Devil's Advocate
Till death do us part.
The Dark Marionette
A different kind of puppet show.
The Path - Progress Journal
This is a journal to mark the path towards being published and in between.
SPONSORED ITEMS
RAOK Upgrade Brigade Group
RAOK (Random Acts Of Kindness) helps members by Upgrading them.
The Writer's Cramp
Write the best STORY or POEM in 24 hours or less and win 10K GPs!
Toadette's Story
Newly hired as a footslave to the princess, Toadette takes you through her wild new life.
Join RAOK!
Use this form as a request to join RAOK to help eligible WdC members with their upgrades.
READ A NEWBIE
life
the hurt and being ready to move on from it.
Day on the farm
Writing exercise - Awn tending to his farm and summoning the Bucketeers to assist him.
Love From Afar
The feelings of someone forced to love from a distance.
Balance
My thoughts on how we overcome illogical thought to produce something more reasonable
BY ONLINE AUTHORS
Writer's Cramp entries
All my Writer's Cramp entries.
An Embedded Poll?
This is the poll for the [ANNOUNCEMENT] on 10 / 26.
Dad, the Preacher
Doubt about Absolute Truth has never been part of my heart since Dad taught me His Name.
Technical Support Forum
Members help other members with technical questions and problems using Writing.Com!
Printed from https://www.writing.com/main/portfolio/item_id/541052-Quorilax 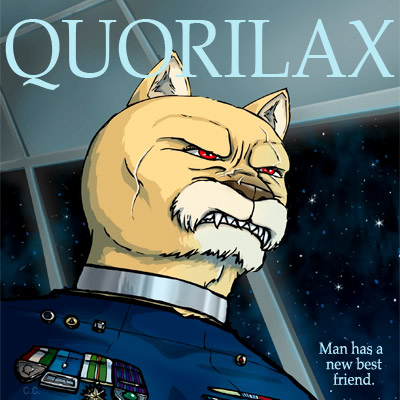 Four different images rotate in the space above; you can refresh this page to see them all. Each appears at the top of one of the four quarters of the story as well. I wish I could say they’re my handiwork, but that credit goes to Schezar

. Her Writing.Com account is largely inactive, but you can check out her artwork at https://www.deviantart.com/tinkerbelcky.

Minneapolis resident Orion O’Reilly goes fishing in the remote wilderness of northern Minnesota, but he is the one who gets reeled in…by aliens who have more than just catch-and-release on their minds.

Orion awakens from his involuntary tranquilization and within minutes finds himself in the hands—literally—of Zarbaxa, a young Quorilaxian woman. Soaring to a height of 121 feet and resembling an anthropomorphic feline covered in black and white fur, she is about as far as an alien can get from being a little green man, which is only the first surprise among many in this story someone likened to “Gulliver’s Travels in space.” Orion finds out that the universe is a big place, especially for a Human. Everyone and everything he encounters now seems to dwarf him to the point of complete irrelevance, but a person’s meaning and importance are not measured with a ruler.

The word count for Quorilax is over 85,000. The story is divided into twenty named chapters, with each quarter having five chapters. The longest chapters in the story are 6, 4, and 3, with over 11,000, 9,000, and 8,500 words respectively, but the rest of the chapters are below 5,500 words. Nevertheless, with Chapter 5 being among the longer chapters as well, Chapters 3 through 6 comprise around 40% of the story. The shortest chapters, 10 and 18, have under 1,000 words a piece. The median chapter length of the story is about 3,600. I include a word count at the top of each chapter.

If you’re so inclined, you can check out "Quorilax Word Search"

[E]. There are no spoilers, and you can learn some interesting tidbits and see some of the people, places, and things that are important to the story.

This story has a content rating of “13+”. What does that mean? In general terms, you can see what falls within a 13+ content rating by clicking on the “13+” in Quorilax’s item header, below the title at the top of the page. Specifically for this story, here is what you can expect:

Horror/Violence: Moderate There is a lot of death implied in this story, but Orion—who narrates most of the story from his perspective—does not see the vast majority of it, only hearing about it indirectly, usually with with no further detail. However, there are several instances of people or non-person animals being injured, killed, or found dead within view of Orion, and these occurrences are typically described more fully.

Touching/Sex: Mild Given their extreme size disadvantage compared to the other people in this story, Humans can do little to nothing to resist those who want to touch or pick up a Human against the Human’s will, and some aliens take advantage of their relative power over Humans on several occasions. In most cases, the non-consensual touching or full-body grabbing is not done with sexual intentions in mind; however, there are a few instances where Orion initially interprets the act that way or it is strongly implied that something may have happened “offscreen.” Full consensual sexual acts are referred to in passing but are not described in any detail; however, there are a couple of interactions, both intraspecies and interspecies, where female and/or male sexual arousal are mentioned, and brief touching of breasts and/or genitals occurs—despite all our differences, the various species’ bodies are very similar to one another in that regard. For a few reasons, the alien races tend to have a more relaxed attitude toward nudity than Humans on Earth, although the Humans featured in the story outside of Earth are nude much of the time as well.

Harsh Language: Mild English swear words like s***, d***, and a**hole appear very sparsely, mostly during a few emotionally charged scenes. There are also some instances of what you might call hate speech, with Humans referred to using derogatory words like “bugs” or “vermin” on several occasions.

The Bottom Line: This is not a very graphic story, but it is not light reading either; in fact, it’s thematically quite heavy. That doesn’t mean there aren’t moments of humor and scenes of sweetness, but they are not in the majority throughout most of the story. However, the phrase “It’s always darkest before the dawn” definitely applies here. Trust me when I say there is a light at the end of this long tunnel.

All Writing.Com images are copyrighted and may not be copied / modified in any way.
All other brand names & trademarks are owned by their respective companies.
Generated in 0.45 seconds at 3:27pm on Jun 30, 2022 via server web2.