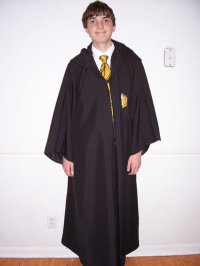 William Jeffrey Nichols, better known as Jeff by friends and family, went to be with Christ on the evening of December 15, 2011. He loved Christ with all his heart and was a member of First Baptist Church of Byhalia, in Byhalia, Mississippi. To all who knew him he was a shining example of faith and courage.

Throughout his long battle with leukemia, then liver failure, he never gave up hope, no matter the odds. He maintained his sense of humor, keeping those around him smiling and their hearts warm. He had a radiance about him, a beautiful godly heart and personality, and he will be greatly missed.

He was the creator and Headmaster of Ultimate Hogwarts: The Rebirth. He was a wonderful friend and mentor to many of the members on site. The site is a RPG type site but with a twist. You have to write everything in the role play post. He was very much the writer. This folder will contain a lot of his work. Though it will also contain Threads, poems, lyrics and other things done for him by family and friends. He will be greatly missed by all who knew him.

In lieu of flowers, a memorial fund has been set up in Jeff’s memory at Citizen’s Bank of Byhalia in Byhalia, Mississippi, and the other at Bancorp South in Sennatobia, Mississippi.

All Writing.Com images are copyrighted and may not be copied / modified in any way.
All other brand names & trademarks are owned by their respective companies.
Generated in 4.75 seconds at 5:03am on Apr 15, 2021 via server WEB2.